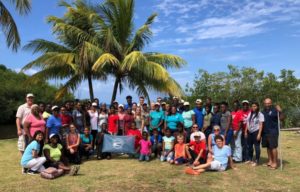 Pinecrest resident Al Merritt built a successful medical supply company which assisted thousands of people in Central and South America, and now he has turned his attention to helping less fortunate people learn to help themselves.  He set up shop in a small office under the roof and with the blessing of Kendall United Methodist Church.  Business acumen meets altruism as a top executive refocuses his time and talents to build a mission office unlike any other and in the middle of the affluent Miami suburb.  The initial goals of Merritt’s SEE (Social Entrepreneurial Enterprises), Inc. include building a retreat center in the Redlands area south of Miami and a vocational and technical school in Jamaica.  While they may seem like disparate projects, the connections become clear once you understand Merritt’s background and vision.

James “Al” Merritt was born in Cincinnati, Ohio and grew up in a typical Midwestern home.  He loved the outdoors, was a Boy Scout and always had a close connection with his faith.  He enjoyed volunteering and working for non-profit groups like the YMCA, and to this day, he remains connected to the area.  But a trip to Spain while he was in college was a turning point.  He spent a year in Europe, learned to speak Spanish and built an affinity for the Latin culture – it would soon serve him well.

Amiable and a natural salesman, he was hired as a sales rep by Welch Allyn, a top medical device manufacturer from upstate New York.  Recognizing his language skills, the company assigned him to a then wide-open territory in Latin America.  Merritt was a top salesperson for many years and saw the need and opportunity to develop a professional distribution company for the Latin American and Caribbean region.  A self-proclaimed workaholic, Merritt built his company, MD International, into a powerhouse, eventually employing more than 180 in Miami and a network of more than 1,000 salespeople throughout Central and South America.  Leveraging his client base in Latin America, MD International expanded dramatically, eventually growing from selling a few product lines like blood pressure monitors, thermometers and diagnostic equipment to selling dozens of high-tech devices including anesthesia machines, ventilators, defibrillators, and endoscopy equipment among many others.

In 2009, Merritt sold MD International with a new set of goals: to reconnect with his family, who had sacrificed tremendously as he arduously traveled, and to give back more to his community.  Sadly, the Great Recession had other plans for him.

“I had some real estate investments in Cincinnati which took a beating during the economic downturn,” says Merritt.  “While my heart wanted to immediately start working on my social entrepreneurship, my brain had to focus on these other business interests.”

Two years ago, after things had stabilized up North, Merritt approached Kendall United Methodist Church Pastor Ruben Velasco with some ideas and an offer.  Merritt would step-up his volunteer efforts with the church and help KUMC expand its mission efforts if he could rent office space on the church campus and work on his other philanthropic endeavors.  Velasco quickly agreed.

“When a long-time member of your congregation makes an offer like that, you accept,” says Pastor Velasco.  “Any church would want to be associated with the type of vision and passion that Al brings.”

For many years, the church has performed mission work in Jamaica, and Merritt too has a close connection to the island.  His wife Patsy was born in Jamaica and they have a home in Port Antonio.  For more than 10 years, the church and the Merritts have worked in the community to bolster training and personal growth opportunities for the youth of the area.  The Portland Arts and Vocational Education (PAVE) Centre creates customized training classes that provide Jamaican students with the training, mentoring and hands-on experience needed to succeed in their vocation of choice.  Merritt and SEE are currently working on an auspicious plan to significantly expand the PAVE Centre (www.PaveCentre.org), including acquiring property on the East Harbor of Port Antonio to build a new school to train students.  Some of Jamaica’s leading hotel and hospitality brands are involved and will benefit from the stream of newly trained workers who graduate from PAVE.

“We work in close concert with the church and our many partners to help young Jamaicans build a personal foundation for success,” says Merritt.  “This new facility is a huge project and we need help.”

Not one to sit around, Merritt has leveraged his many community contacts and also introduced his projects to friends from the influential business group YPO, the Young Presidents Organization.  Back in 1996 as the chief executive of MD International, Merritt joined YPO, a global network of young chief executives with approximately 24,000 members in more than 130 countries.  The organization’s members harness the knowledge, influence and trust of the world’s most influential and innovative business leaders to inspire business, personal, family and community impact.  Many Miami-based YPO members have made the trip to Port Antonio to learn about the PAVE Centre and countless others have pledged support.  Merritt is on the board of the local YPO office, which now co-locates with the SEE/KUMC mission office.

In South Florida, Merritt and SEE have teamed with the Manfred Memorial Foundation to develop a retreat center in the Redlands area of South Miami-Dade County.  The group has assembled a 33-acre site with plans to build a needed retreat and counseling facility in the area.  It will include meeting space, part-time housing, and outdoor recreation space.  Merritt envisions creating a unique facility that can be used by corporations, non-profits and religious groups as retreat space but also offer onsite counseling for individuals and couples.

Merritt says that he likes to back causes that help people improve their lives in a meaningful way, offering training, education and support that can last a lifetime.

“We are creating infrastructure and processes that will enable personal transformation here and in Jamaica,” says Merritt.  “We pledge to have a lasting impact.”